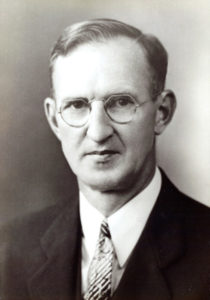 Following is an article about the Rev. John J. DeWaard who founding pastor of Calvary OPC in Cedar Grove. For a PDF copy of this article, click here.

See also an article (click here) from The Presbyterian Guardian published on August 25, 1959 following his passing into glory a few weeks earlier.

In 1925 a fresh face appeared in the Presbyterian Church U.S.A. John J. DeWaard had recently graduated from Princeton Seminary and was being examined for ordination by the Presbytery of Milwaukee. Rather than continue his studies at Princeton, DeWaard pursued a call to the First Presbyterian Church in Cedar Grove, Wisconsin. Dr. Geerhardus Vos had recommended his young student, and the congregation in Cedar Grove was eager for his arrival.

Initial impressions were altogether positive. One Presbytery examiner reported to the committee as follows: “I heartily recommend for approval all the parts of trial submitted to me: and bespeak for our brother a life of great usefulness in the ministry of the church, which in time I think will be in a professor’s chair, perhaps the one once occupied by Dr. Charles Hodge.” A second examiner was equally enthusiastic, saying, “I am personally glad that this young brother is seeking a part and place in the ministry of our Church.”

And so John DeWaard was ordained to the gospel ministry and installed in Cedar Grove on July 9, 1925. Just ten years later the same Presbytery would forcibly remove DeWaard, dissolving the pastoral relationship despite objections from over 300 members.

What was DeWaard’s offense? Like many others he began to detect modernism in the church boards. Theological modernism was a non-redemptive religion – a counterfeit of Christianity. Although modernists commonly employed orthodox terminology, they denied central Christian doctrines. In documents such as the 1924 Auburn Affirmation, the virgin birth, the deity, the miracles, the atoning death and the resurrection of Jesus Christ were all called into question.

This dangerous drift became unavoidably obvious one Saturday evening at the church manse in Cedar Grove. One of the Sunday School teachers showed up with troubling questions about the lesson she was to present the next morning. When Rev. DeWaard examined the denominational materials, he knew that modernism was taking over the PCUSA.

As a man of courage and conviction, he warned his people both privately and publicly about the growing unbelief in their church boards. This criticism, together with a decision to withhold financial support for PCUSA Foreign Missions, drew the ire of the church hierarchy.

DeWaard explained in a statement released in 1936: “I was told to keep still and give them the money or leave my pulpit. When God commands speech, silence becomes impossible, and to support in the Presbyterian Church U.S.A., anything save only the reformed faith, so beautifully expressed in the confession is wrong. For refusing to obey this command, which the church according to its constitution has no authority to give, and for that reason alone, my pulpit was taken from me.”

The struggle was a matter of biblical principle for John DeWaard. He rightly reasoned that the PCUSA had no biblical basis for demanding his silence, nor for compelling his congregation to financially support the spread of modernism through the church boards.

In the statement previously cited, DeWaard said, “According to the constitution of the Presbyterian Church, U.S.A., ‘all church power, whether exercised by the body in general or in the way of representation by delegated authority, is only ministerial and declarative’; that is to say, that the Holy Scriptures are the only rule of faith and manners; that no judicatory ought to pretend to make laws, to bind the conscience in virtue of their own authority, and that all their decisions should be founded on the revealed will of God, the Presbyterian church is today not only ignoring this part of the constitution, but is setting the whole constitution aside while offering lip service to orderly government.”

As DeWaard saw it, if he had obeyed the edict and desisted from criticizing the modernism of the church boards, he would have violated his own ordination vows. Worse still, he would have allowed ecclesiastical tyranny to go unchallenged. DeWaard felt so strongly about this tyranny that he referred to it publicly as “fascism in the church.”

Being a good Presbyterian, DeWaard complained the Presbytery’s action first to the Synod of Wisconsin, and then to the 1936 General Assembly. At the same Syracuse Assembly where Dr. Machen was deposed, John DeWaard’s complaint was denied.

When the Presbytery of Milwaukee followed through and declared the pastoral relationship dissolved and the pulpit vacant, over 350 members walked out of the sanctuary in support of their pastor. Many of these became charter members of Calvary Orthodox Presbyterian Church in Cedar Grove.

DeWaard served as pastor of Calvary OPC for another four years before taking a call to Memorial OPC in Rochester, New York. There he served until his retirement in 1958.

In addition to his pastoral duties, John DeWaard was an active member of his presbyteries and of the General Assembly, filling numerous committee posts. In 1937 DeWaard ably served as moderator over the third General Assembly. DeWaard presided over contentious debate during that Assembly concerning the Independent Board of Foreign Missions and the “alcohol abstinence overture” from the Presbytery of Chicago.

In a memorial published after his death, John Clelland and Calvin K. Cummings said of DeWaard, “The church of Christ owes a debt of gratitude to this faithful servant of the Lord in his stand for the historic Christian and Reformed faith within the new church of which he had become a member. There were those who wished to place the American Presbyterian tradition on a par with and above the teaching of Scripture. Though it was an unpopular thing to do at the time, John DeWaard stood with those who dared to stand upon the authority of Scripture for all the teaching and practices of the church. Mr. DeWaard contributed substantially to the leadership of those who set the course of the Orthodox Presbyterian Church in the direction of a commitment to the Word of God and the whole counsel of God. Apart from the stand of Mr. DeWaard and others like him, the witness of the Orthodox Presbyterian Church might well be a diluted witness today.”

Over his years of ministry, John DeWaard staunchly supported Westminster Seminary, serving on the board of directors for 23 years, including 11 years as Vice President of the board.

The DeWaards frequent entertained house guests including Dr. Machen, Professor Murray and especially Dr. Van Til. DeWaard’s daughter Elsie Greydanus recalls, “Dad and Van Til were close friends. They read the same books, they read the same articles, and they discussed them at length. They were best friends – very best friends mentally and spiritually.” When Van Til experienced difficulty and frustration in his work, he could always turn to his long time friend, John DeWaard.

John DeWaard was also a devoted husband and father. He lovingly cared for his wife Hattie and their six children, Leona, Elsie, John, Harriet, Murray, and Mary. Leona writes of her father, “I remember him with great love. He was a caring, sensitive, and idealistic man.”

For his courageous stand against modernism, Rev. DeWaard was publicly maligned. The Milwaukee Journal labeled him as an “ultra-fundamentalist” who was reportedly ousted for “insubordination” and “disobedience.” Even after DeWaard renounced the jurisdiction of the PCUSA, his old Presbytery continued to attack him for his principled opposition to modernism, publicly portraying him as a dangerous schismatic.

Yet despite the unfair treatment he received, DeWaard refused to feel sorry for himself. In one published account he said, “Don’t think I am a martyr. We have lost the church we were in for 15 years. My family and I have lost the home we lived in. But I am happy now – happier than I have ever been.”

Daughter Leona Klooster writes in a family history, “I can see my father in his chair on the porch, looking up from whatever book he was reading to say to my mother, ‘The lines have fallen unto me in pleasant places; yea, I have a goodly heritage.’”

Following his retirement, Rev. DeWaard continued to proclaim the gospel of Christ. His ability to preach in the Dutch language kept him in constant demand. On August 9, 1959 he was scheduled to preach in Ottawa, Canada. His hosts bade him goodnight so that he might be refreshed for the coming Lord’s Day. This faithful servant fell asleep that night in peace, and awoke the next day in glory with his Savior.